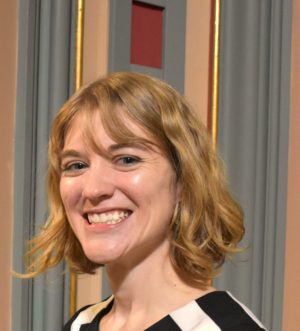 As Director of Programs, Angela is responsible for developing NYLCV Education Fund’s public policy forums, civic engagement campaigns, and nonpartisan electoral programs. In addition, she cultivates and manages the corporate and foundation support for all of NYLCVEF’s programming. A native New Yorker, Angela grew up exploring the Hudson Valley and the Catskill Mountains, and escapes to the woods as often as possible. Prior to joining NYLCV Angela worked at the Community Service Society of New York (CSS), where she conducted extensive foundation research and helped raise institutional funds for CSS’s varied programs. Angela also worked with the national nonprofit, Women’s Voices for the Earth (WVE), which is dedicated to protecting environmental and human health from toxic chemicals found in consumer products. She helped WVE grow its programming by providing research support, fielding a community survey, and expanding its communications, both digitally and in the community.

Angela holds a Bachelor’s degree in Philosophy from SUNY Oneonta and a Master of Arts in Environmental Philosophy from the University of Montana. She can be reached at ahotaling@nylcv.org.