1% For Parks, And Why NYC Needs It Now
New York City’s parks and green areas not only bring the community together and give the city its unique character, but also serve as vital assets in environmental conservation. The preservation of these parks is one of NYLCV’s top priorities, and should be for NYC legislators as well. That’s why NYLCV joined New Yorkers for Parks and DC 37 to launch the Play Fair for Parks campaign. For the last few years, Play Fair has been pushing for the revitalization of these natural spaces to provide recreational opportunities for the community, improve environmental resiliency, and make the city more sustainable.
Learn More 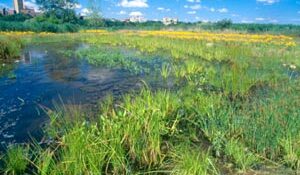 NYLCV Advocates for Expanded Protection of New York Wetlands
In the fight against climate change, carbon sinks play a vital role in reducing the amount of greenhouse gasses in the atmosphere. These sinks, such as forests and wetlands, also host a variety of biodiversity, providing the foundation on which the climate can heal and recover. However, over 60 percent of New York State’s wetlands have been lost due to human development, according to the Environmental Protection Agency, putting already-fragile ecosystems at risk as greenhouse gasses are released into the atmosphere.
Learn More

2022 NYC Policy Agenda Highlights
As New York City begins strategizing for the new year, our new administration and Council Members have the opportunity to start making transformative investments in our environmental infrastructure and resiliency. NYLCV’s newest Policy Agenda lists what issues should be made top priority in the transportation, energy, public health, conservation, and environmental justice sectors, and highlights the legislative opportunities that will get us there. We hope to build upon our progress made last year and continue making bold policy decisions for the good of our community. Below are some of the main points made in this year’s Policy Agenda.
Learn More

News
NYLCV joins coalition to protect forests
With the goal of a healthy, resilient, equitable, and just New York City in mind, our partners at The Nature Conservancy organized The Forest for All NYC coalition of nearly 50 organizations and 70 participants, including NYLCV. The group is dedicated to the protection and long-term resilience of NYC’s more than 7 million trees.
Learn More