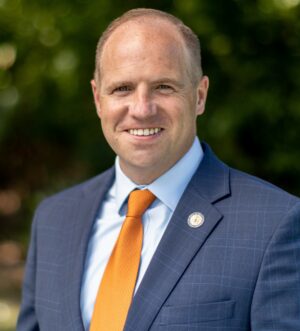 Tim Kennedy is running for State Senate in the 63rd District

Tim Kennedy is running for State Senate in the 63rd District, and has been the incumbent since his election in 2013. He has worked to secure grants to heavily polluted areas as a result of sewage runoff from municipal sewer systems, and helped pass a nation-leading environmental agenda. Senator Kennedy introduced and passed a Paint Stewardship program, and has introduced legislation to create a tax credit for the purchase and installation of geothermal energy systems. As chair of the Senate Transportation Committee, he has introduced legislation that would require public transportation systems to purchase zero-emission buses beginning in 2029, make it easier for school districts to be reimbursed for the purchase or lease of electric school buses, as well as legislation that would establish an electric vehicle charging commercial tariff, making electric charging infrastructure more economically feasible. Kennedy has plans to electrify metro bus and school bus fleets, and to make it easier to implement electric charging infrastructure. He supports the Brownfield Cleanup Program, helping to reduce a legacy of pollution. Kennedy voted for the bill that required the DEC to post lists of dangerous chemicals that are found in humans, drinking water, and more, and holds manufacturers accountable for selling children’s products that contain dangerous chemicals. He voted in favor of temporarily extending the Aquatic Invasive Species Act, and a bill to provide Class C waterways the same protections as streams.